The manor house, dating from the XVII century, is set in the heart of the gardens, in an enclosed courtyard with yellow sand, reminiscent of the ochre colour of its facade. Two pavilions are located at each side of the courtyard facing the main house.

This building, more bourgeois than noble, was built on the site of a small medieval castle destroyed during the ‘La Fronde’ (a series of Civil Wars between 1648 and 1653) by the troops of the Grand Condé (Louis II, Prince of Condé).  The owner of the castle and its lands, Antoine de Costes de la Calprenède was opposed to the Grand Condé and was Sarlat’s representative to the King’s Council and first Consul and defender of the city. With victory for Louis XIV and Mazarin marking the end of the war, a manor house, not a castle, was immediately rebuilt. The architecture of the house bears witness to a calmer, more civilised era.  The building is linear, due to fortifications becoming redundant, while many windows open to let light in.  The staircase is no longer a spiral in the tower (until then the tower was a symbol of the nobility) but is straight and in the center of the building. The towers are replaced by weather vanes, the new emblem of the nobility. These weather vanes, in the same way as the family crest (representing a unicorn), were toppled to the ground in protest by the revolutionaries in 1789. The manor house is also known as ‘Manoir d’Artaban’ in homage to the author Gauthier de Costes de la Calprenède, writer and cousin to Antoine and an ancestor of the 22 generations who have succeeded to Eyrignac until the present day.  He is also the author of the famous monologue “Fier comme Artaban”, which may be translaed in English as ‘Proud as a Peacock’.

In front of the house, and at each side of the courtyard stand two pavilions. At one side the Dovecote, its size symbolising the wealth of the Lord.  On the other side is the Romanesque family chapel, a unique feature reminiscent of the primitive medieval castle.  The chapel is still consecrated and has seen all the members of the family baptised there.  Between the two buildings is one of the seven water sources so valulable to the estate. 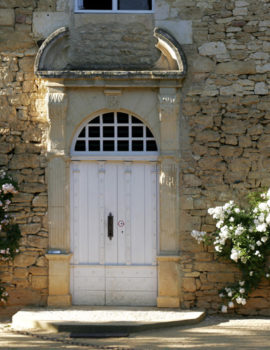 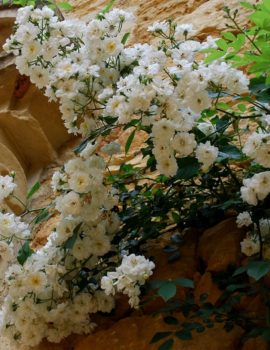 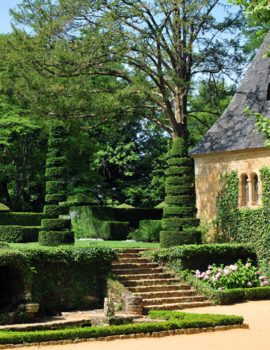 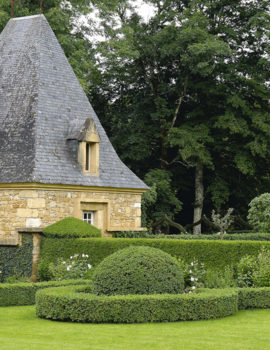 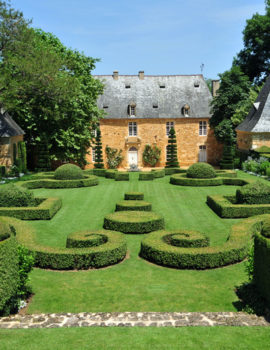 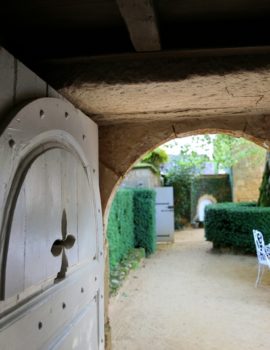 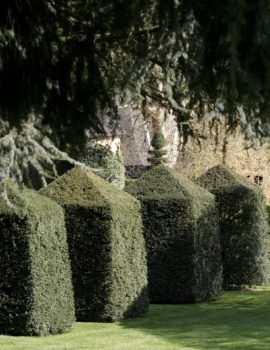 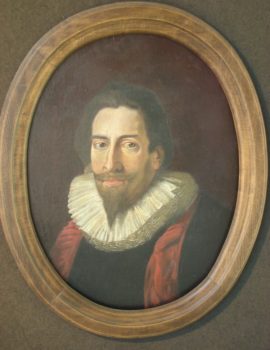